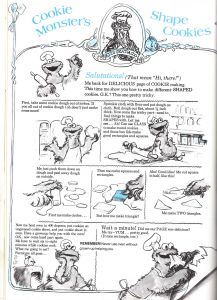 I don’t know when I started reading comics.  I guess that really depends on how you define that term, ‘comic’.  By the age of five, I was addicted to the Sesame Street Treasury.  My favorite thing, it hosted lots of short stories, poems, infographics (long before they were even called that), and comics.  I remember clearly strips about Oscar the Grouch, Ernie, Big Bird, and the Letter O.  I was hooked.

Years later, in my teenage years, I would read my way through the Marvel/DC universe in a weekend.  By the time I reached my junior year of high school, graphic novels had invaded my library account.  Neil Gaiman’s Sandman series enthralled me; the school library had to make me return it at least four times.  Batman and I were first introduced around tenth grade (by Batman, I mean the Dark Knight via Frank Miller); by eleventh grade I had added most of the Marvel universe, Watchmen, and some of DC (Supergirl).  My graduation was truly that- I had graduated into the world of indie comics by way of Ghost World.

It wasn’t until my year-in-between that I really understood the attraction of reading visually or even began to think about comics as an alternative mode of thinking/reading.  It was  Blankets by Craig Thompson that really married me to the ideology that graphic novels aren’t just an art form but a visually representation of some very complicated contexts and philosophies.  In many ways, it’s much harder to analyze and understand a comic book than a novel (Don’t believe me? Read Watchmen.  Or Maus.)

But I’m not trying to make a case for reading or even teaching comics- you either will or you won’t- and I’ll make that argument in another post.  Rather I’m reflecting on something I’m hoping to see change in the world of graphic novels and in school libraries.  Reading comic books is a great way for anyone of any age discover new worlds.  However, if you’re female, those worlds are still very much dominated and populated by men.  Male characters, male authors, male illustrators- they by and large own the market.  Now, I’m not a hater; I don’t think that it’s because women are systematically refused entry (video gaming is an entirely different story).  I just think it doesn’t dawn on girls who are indoctrinated into this culture to think about their heroes as female.  The stereotypes of old are very much alive and well: damsel in distress, the temptress, the virgin.  And I’m won’t argue their significance or lack of to our culture.

I am, however, asking that they be recognized for what they are- sidekicks and plot device.  And I want more for the girls I teach and myself. 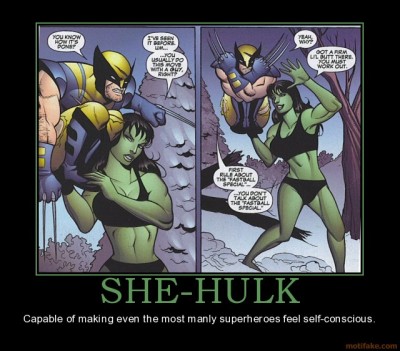 That’s why I started compiling a list of comics that focus on female protagonists, superheros, illustrators, and writers.  Because every time I see a girl reading a comic book, because every time we catch each other’s eye, I know there will be a moment when she recognizes that women, that she, is missing in that world.  At that moment, I want to reach over and hand her something different, something else, something that declares “you are here.  Read this.  Then, perhaps, you can start working on your own.” I want her to giggle at the snarky SheHulk (not the fourth wall…again), understand exactly how the new Ms. Marvel feels, learn about a different culture with Persepolis.  Mostly, I want her to know that superheros don’t have to wear capes or even costumes, and they don’t even have to be male.

Here is my list.  If you want a review, a recommendation, a suggestion for where to start, don’t hesitate.  I’ll be happy to point you in a new direction.

She Hulk Volume 1: Law and Disorder by Charles Soule
Persepolis by Marijane Satrapi
Rapunzel”s Revenge by Dean Hale
A Wrinkle in Time by Hope Larson
Hereville: How Mirka Got Her Sword by Barry Deutsch
Athena by George O”Conner
Delilah Dirk by Tony Cliff
Coraline by Neil Gaiman
Marzi by Sylvain Savoia
Sita”s Ramayana by Moyna Chitraka
Alia”s Mission: Saving the books of Iraq by Mark Alan Stamaty
Anya”s Ghost by Vern Brosgol
Foiled by Jane Yoden
Regifters by Mike Careym
The Girl Who Owned a City by Joelle Jones
A Game for Swallows: To Die, To Leave, To Return by Zeina Abirached
The Plain Janes by Cecil Castelluci
This One Summer by Mariko Tamaki
Ms. Marvel by C. Willow Wilson
I Kill Giants by Joe Kelly
Gray Horses by Hope Larson
Aya by Marguerite Abouet