When I first started teaching in 2005, my principal was horrified at my request for a classroom wifi hotspot.  Horrified.  I received a document camera instead.  The next year I asked for the new iPad- just one for my classroom.  (It’s hard to believe, but iPads have only been around seven years!)  The horrified look. Again.

I left for graduate school the next year, thinking a graduate degree would help negotiate my bargining power with administration.

Now, having returned to the high school classroom some years later, I’m having the same conversations about technology and the classroom.  It is less about personal devices (we are a bring-your-own-device school); classrooms with laptops are the new norm.  And while there are still worthy conversations about social media, time on task, and access to new technology, I have full administrative support on the need for technology in the classroom.  (I even have my own hotspot!)  Yet there is a new battlefront brewing, and I’m wondering how much this one might re-shape or redefine teaching.  I wonder how much teachers, particularly humanities teachers, are willing to embrace the new virtual reality technologies.

For the past four years, I’ve been an aggressive advocator for problem-based learning and game-based learning.  It comes from my own experience as a learner.  I simply retain knowledge best when learning to solve a problem or competing.  Between my many years on team sports and family game nights, my brain is hard wired to want learning to be at the very least fun.  I don’t think today’s generations are much different.  And I don’t deny the value of lecturing or even socratic methods; I just think problem-based learning and game-based learning are better frameworks to structure (preferably) interdisciplinary design.  So when VR (virtual reality) entered mainstream markets this year, I saw no reason why education wouldn’t be the first frontier for this relatively new technology.

Before I launch into my diatribe about how VR could re-shape the classroom, I do need to pay service to a growing concern among educators.  Grant Lichtman author of #EdJourney: A Roadmap to the Future of Education says it best, “Technology enables education; it doesn’t drive education…[technology] is just another one those changes that require a growth mindset.”  Many educators and even administrations focus more on integrating new technologies long before evaluating how that technology encourages learning or even if there is already implemented training for that new technology.  This can scare many would-be tech users away. Simply implementing new technology for the sake of declaring the school has that technology is a slippery slope: I’ve visited many a classroom where the SmartBoard is just a projector screen or the classroom iPad is still in the box.  Just the same, there are classrooms that declare their innovation simply by using technology.  Using is much different than implementation, and successful implementation happens when technology is allowed to be the vehicle to get to an answer or objective beyond simply use. 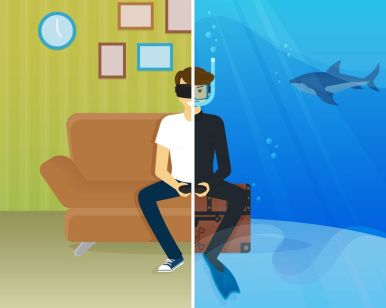 Nonetheless, the new augmented (AR) and virtual realities (VR) excite me. There are some obvious reasons: AR and VR give access to students that they may not have otherwise- like the ability to see Greek ruins and never leave the room.  Virtual fieldtrips, while not an argument for replacing the real experience, could subsidize the cost of fieldtrips.  The internet has made so many of my students visual learners that I imagine VR and AR as just an extension of their visual mind-mapping, particularly for complex subjects.  There are other reasons to be interested in the AR/VR classroom.  Imagine problem-based learning in an augmented reality.  Team playing through a dangerous viral outbreak. Role playing as a crew member aboard Ahab’s ship.  Participating in an archaelogical dig. Studying the eco-system of the rain forest.  The possibilities are endless.  More than anything, I want my students to build stories, build worlds with a complex understanding of how a story works.  I want them to watch Gatsby become consumed with materialism and I want them to work alongside student coders to create new games, new escape rooms.

Essentially, I want teachers to start envisioning the classroom as its own VR- something they can use to engage students in the 21st century beyond recitation of facts.  I want my students to have safe spaces to practice digital citizenship, a growing necessity in this very connected world.  And, just as important, I want resources and professional development to grow with the new technology, rather than a learn as you go approach that many teachers are forced to do when faced with new technology.  I want that to be a key argument for putting new technology in the hands of educators while partnering with the IT department, who can often be territorial even when it comes to letting teachers teach or write tech focused professional development.  More than anything, I want to challenge the old boundaries with the new reality; I want the classroom to extend beyond four walls for my students. That technology is here, and if we are really going to be innovative, we need to embrace VR as an extention of student ability.

So.  Who else is asking their administration for VR gear?